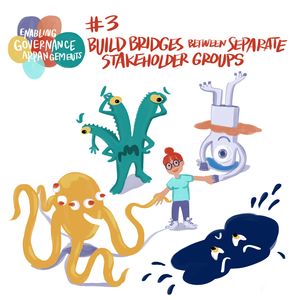 Metaphorically building bridges between separate groups of stakeholders often requires the establishment of formal or informal roles (institutionalisation) for individuals or organisations to intermediate, broker information and translate language between different stakeholders of a project. Such “intermediaries” play a crucial role by translating and enabling communication e.g. between civil society groups and governmental actors in order to realize a joint project. They have to be recognised in a way that both civil society groups and institutional/municipal actors feel heard and valued and thus build trust in stakeholders which follow different rationales and have developed different cultures of interaction. More important than how exactly the intermediary operates is its function, which at its core is often about enabling communication and furthering democratic participation on a decentralised, local level. Therefore an intermediary can be of different nature e.g a single project manager, a committee/platform, an open-meeting space, a dedicated organisation or even a well respected community member. In some cases, like in the fourth example below from London, local governments can also serve and work as an intermediary between different stakeholders. Such bridging roles are not exclusively found between institutional actors and citizens. Connecting/ translating language/ and intermediating between interests of different departments within a municipality can be equally important (to break up ‘silos’ or to counter ‘compartmentalization’).

The “Vauban city planning council” was a consultative committee consisting of municipal actors, local parliamentarians and citizens. It can be considered as an intermediary as it was a place for discussion and mediation between stakeholders (Q15).

There have been changes in terms of changing how the energy system can be imagined, who owns it and who participates in it. Political documents for example the coalition agreement in Berlin gives particular attention to citizens’ participation in the energy sector. Now there is also legislation for tenants’ energy self-consumption models which the citizen energy movement has contributed to (Interview with a BEB representative on Sep. 9,2020).

The local government, Lambeth Council, which had a small group running a Low Carbon Zone served as an intermediary organization in the beginning which helped the team organize themselves and contact other relevant groups. The enabling configuration is the connectedness of this Council to various groups in the area. However, this group was small and had minimal capacity (Q13).

The Community Land Trust in Brussels is a social real estate developer that builds affordable housing projects on collectively-owned land in Brussels for people with limited means. Collaboration between separate stakeholder groups is integral to the project as its managing board consists of civil society/housing organisations, private firms, social enterprises and the local government (Q5).

In several neighbourhoods, multi-stakeholder decision making processes have been formalized in local, regular working groups that are steering the design for their Superblocks. This was a result of the lack of participation processes in Poblenou and the municipality retroactively realizing that individual Superblocks have to be adapted to local particularities. The working groups also serve promotional purposes e.g, presenting the Municipal Action Plan to residents and engaging citizens, local associations, and local economy. They also try to find agreements between different voices and stakeholder interests (Q13).

This enabling governance arrangement tries to overcome injustices caused mostly by the Lack of effective knowledge brokerage and stewardship opportunities as well as Unfit institutional structures.

Lack of effective knowledge brokerage and stewardship opportunities as a driver of injustice refers to the ways in which (access to) useful information and know-how around sustainable urban interventions, and their benefits, is not shared effectively or equally among social groups, sectors or disciplines and thus constrain the potential for both sustainability and justice. Creating bridging roles can help in overcoming barriers that certain disadvantaged groups might have, especially concerning the access to useful information of urban development projects around sustainability and justice. By translating language of practitioners/academia to one that disadvantaged groups can connect to in a better way, they can also express their needs and potential fears around these projects furthering especially procedural justice as well as justice as recognition.

Unfit institutional structures as a driver of injustice refers to those aspects or functions of organizations, public offices, administrations and authorities that deal with urban governance and stand in the way of achieving just outcomes in urban sustainability. Trying to bridge between e.g different municipal departments is key to overcoming silo-thinking and for the development of projects that integrate justice in urban sustainability governance. Institutionalising a role to translate language between municipal actors and underrepresented groups is also central when trying to commit to a meaningful participatory process.

As mentioned, intermediaries have to meaningfully consider voices of all involved stakeholders of a project. They therefore possess a very powerful role, as they can steer the project in certain directions by favoring some voices over others. This is especially important in justice oriented sustainability governance as the past decades have shown that certain entrenched interests (economic, class-based, race-based...) have been given priority in urban governance. This means that intermediaries have to know about types of barriers that different groups of underrepresented citizens might face. These barriers can be very unique for e.g women, children, undereducated/poor residents or people who are underrepresented because of their race. Sometimes, exclusion of underrepresented voices may therefore even happen with intermediaries that are supposed to include very different groups of citizens, as it is very difficult to recognise these barriers if you come from a position of power yourself. Intermediators may also play a highly problematic role if they disguise or downplay actual differences in objectives between different actors (e.g. achieving ‘green growth’ vs. ‘overcoming capitalism’) for the sake of harmony, a feeling of common purpose or the success of tangible projects. Furthermore, intermediaries are not always neutral/impartial. They might be biased toward one type of institutional logic (or a way of doing things) or toward the priorities of the intermediary host (or "bridging platform"). This may cause conflict and undermine the bridging efforts. Finally, a general issue that stands in the way of more just and sustainable cities is the project by project basis on which municipalities operate. This prevents long-term improvement of projects and leads to the repetition of similar mistakes, also related to stakeholder communication processes. Intermediaries, which are exposed to a variety of voices inside their cities, need to outlive singular projects and act as the long-term memory of the city, possibly as an institutionalised entity. This would truly improve not only communication between citizens and municipalities, but also between different departments inside the municipality itself - breaking up compartmentalization.

In Malmö, each department has its own unit designed for community engagement (e.g the Highway and Parks department, the Culture department…). On a city level, these units can be brought together through an intermediary organization connecting neighbours, the city, housing companies, local companies. These departments could then become the core of long-term structured development processes, acting as an institutionalized intermediary and memory while transferring knowledge in and between cities (Q31).

The collaboration between citizens and the municipality was not always easy because each group had to adapt to the institutional logic of the others. For instance, when the GRAG invited a representative of Forum Vauban to take over a permanent seat in a consulting role, “Forum Vauban welcomed this decision of the city as a step towards them. Nevertheless they were not always satisfied, because the citizens were expected to adapt to the logic of urban planning which already existed in the city bureaucracy (Q23).

Institutions and processes that rely on different people to meet are facing restrictions concerning the number of people that can participate or even making meetings impossible at all. Purely switching to online formats does not seem feasible here as these bridging organizations build on low-entry barriers. Online meetings/formats could be a higher hurdle especially for older or less educated people as well as people who do not speak the language properly making the work of bridging roles more difficult.