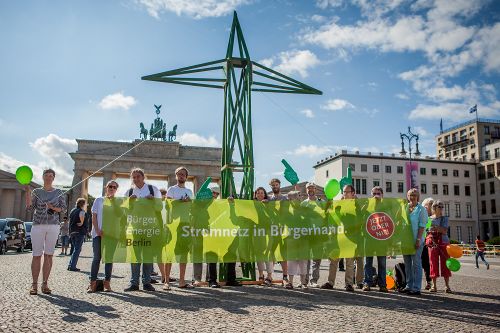 Imagine your city where a group of highly motivated citizens with diverse expertise comes together as a cooperative to flag their concerns about unsustainable practices in a metropolitan energy system.

Can such a citizen-led cooperative challenge the neoliberal growth paradigm in the energy market?

It seems that the present energy market has various social and ecological disadvantages that are inflicted by the profit-oriented, monopolized private energy market. This has spurred the engagement of citizens who are increasingly aware of their needs, capabilities, and political landscapes. They may wish to govern local energy systems themselves in ways that are inclusive, accessible, and sustainable in the long run (Q9).

How can financial and human resources be generated for executing a citizen-based initiative?

Such citizen-led cooperatives can be extended and strengthened by acquiring financial and in-kind support from businesses, research institutes, NGOs, students and media (Q12). Cooperatives may also profit from inviting experts with experience in establishing similar interventions for guidance, which may be especially important during the early stages of the process (Q13). Furthermore, awareness campaigns with the help of the media can sensitize the general public and help to earn trust and support from political leaders (Q32).

What major policies and management approaches can keep an intervention relevant and alive?

Supportive EU directives such as the EU Renewable Energy Directive as well as national policies and constitutional rights (for example right to hold plebiscites, right to assembly, and right to form cooperatives) can provide an enabling environment for such interventions (Q19). Moreover, a flexible project management approach (changing with on-the-ground circumstances) without compromising on the fundamental vision and goal of an intervention can keep the intervention relevant and alive.

What actor constellations can be crucial for effective participation, governance, and decision-making?

Governing energy systems as a cooperative could allow for wide participation among the membership. It can have volunteers and cooperative members working in different capacities. General assemblies of the cooperative can allow for the participation of all members at different levels of the decision-making process. However, to ensure accountability, a supervisory board consisting of founders and highly engaged individuals could develop strategic plans and take action (Q15).

How can a citizen-based initiative cope with potential governance, financial, and political challenges?

The intervention may be confronted with various challenges, especially those related to financial arrangements, political culture, and regulatory procedures. Financial challenges could be tackled partly with shareholder/membership fees and partly by attracting donors and sponsors. Political and general public’s opinion can be influenced by running awareness campaigns, engaging with the media, and through outreach to individuals (Q23). Introducing a citizen-driven management partner in the arena of public vs. private management could be highly challenging. However, different paths and approaches can be adopted to realize the overarching goals of this intervention while carefully aligning various stakeholders and securing wide public support (Q32).

The scenario is based on citizen-driven intervention known as BürgerEnergie Berlin (BEB). It is a cooperative that unites citizens in Berlin - the capital and a city-state of Germany - to work together for a sustainable, climate-friendly, and citizen-owned energy system. The intervention is based at the city level. BEB aims to acquire a share in the energy grid of Berlin and change the energy mix towards renewable energy. It intends to promote and support members economically and build a socially and environmentally compatible, decentralized, inexpensive, and nuclear-free sustainable energy system. If you are interested in how obstacles have been overcome in this case, see Q24. Check out their website to learn more: https://www.buerger-energie-berlin.de/

It addresses a driver of injustice: