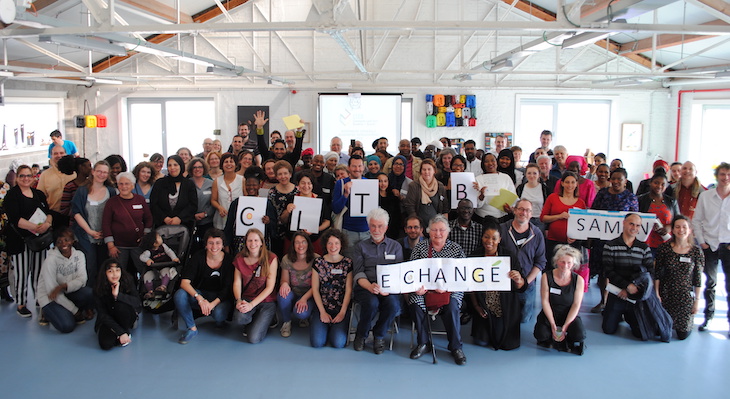 Imagine a city where residents of limited means co-develop affordable, decent and socially sustainable housing on communally-owned land with the help of public and private support.

It may start with collaboration between housing associations in the city (Q13). Due to a housing crisis causing shortfalls in affordable decent housing for low-income and marginalised groups, such associations are likely to be active and looking for ways to make change (Q9). An idea they might take up is community owned and governed affordable housing.

How could they learn from similar initiatives to get the ball rolling?

In dreaming up this idea, they could build on collective experiences in the city with other affordable housing projects, such as a solidarity savings group or a passive solar building to house low income migrant families (Q26a). For further inspiration and advice, a site visit to a successful model of community owned and governed affordable housing in another city should provide more concrete details, such as how to arrange their own governance system (Q26b). The governance system adopted by this initiative should place current and future residents at its core, engaging them in community-based decision making and giving them high levels of responsibility over the development and management of their buildings (Q14 & Q15).

The caretakers of this increasingly concrete idea may wish to promptly use their collective expertise and influence to form a united appeal for the local government’s support (Q13). Such a productive and early engagement of these groups with the local government just might be crucial for the idea to take off, since government endorsement and funding will be essential (Q13).

If the local government recognizes this as an innovative opportunity to provide residents with decent, affordable housing, they could provide financial support to start-up, operate, and grow the initiative. This would likely come in the form of continued grants and investment subsidies (Q21). Revenue from residents’ mortgages would compliment this funding source, in addition to non-government grants and donations (Q21).

Are there any risks to this financial arrangement?

Unfortunately, such a heavy dependence on one funding source could be risky for the initiative. Since if government priorities change, the annual investment subsidies may be jeopardized (Q23d). In the event of lost public funding, it would be necessary to turn to alternate sources such as charities and other funding organizations (Q24). Additionally, if all goes well, the affordable housing innovation will grow and need to secure increased reliable funding for its sustained operation into the future without over stretching capacities (Q23d).

Trusting that government support will be retained, or that sufficient alternate funding is found, the future of a city with innovative governance of affordable housing comes into focus. Momentum builds as more projects are replicated and are able to serve more people in need. Initiative champions may even increase their ambitions to enable a wider movement to bring similar success to cities across Europe (Q31a).

It fits under the approaches: