"Limited citizen participation in urban planning" as a driver of injustice refers to the limited involvement and engagement of citizens and citizens’ initiatives in decision-making around the planning, design, implementation and/or evaluation of urban sustainability-oriented interventions.

When citizen participation is not encouraged, supported and sought out in a meaningful way, sustainability planning interventions risk being a reflection of top-down priorities that represent and enhance the status quo in terms of both sustainability and injustice. The question of participation does not only concern the availability of structures in place to accommodate input from local communities and stakeholders, but also the openness and potential of these structures with regard to inclusivity and impact (Anguelovski et al., 2018[1]; Fainstein, 2014[2]; Kotsila et al., 2020[3]). In other words, it is important to consider what and whom are the different collectives that participate representing, what is the depth of participation that is allowed or catered for, and how much are participation outcomes taken into account when designing interventions. 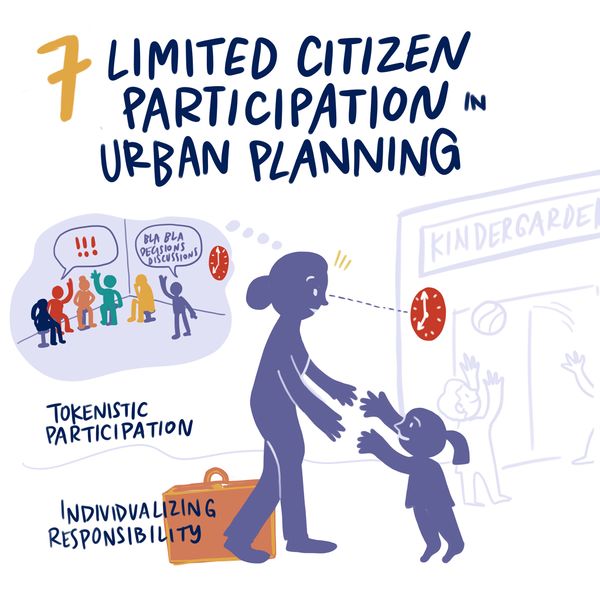 Inclusive participation can be hindered in both centrally/state-managed projects and in community-based initiatives around urban sustainability, when existing inequalities are not acknowledged in their design.

For example, a social housing cooperation project in Rotterdam, counted on the participation of the housing community for the design of a climate adaptation plan in the communal public area. However, the time span for this process of participation was too long. Renters were initially involved but later started dropping out while homeowners had a stronger voice and their opinion was more valued. The community input was eventually minimal as the sense of ownership of the plan by most of the community was also lost. This project highlighted a sort of institutional classism which foreclosed the possibility of inclusivity and justice in the participation process and its targeted outcome: a sustainability intervention [UrbanA Arena insights].

Limited participation and citizen engagement with urban planning processes is also observed to be an issue in those research and innovation projects that aim to enhance or promote co-creation through inclusive processes of knowledge sharing. Some of these challenges have to do with the short timelines of research projects which do not allow for deeper engagement with local stakeholders and communities, and the pre-defined research methods and processes of analysis that many of these projects follow.

Participation is often cast in terms of stewardship and volunteerism around urban sustainability (Connolly et al.2013[4]). Community-initiated projects (e.g. urban gardens, repair shops, food sharing networks) support urban sustainability objectives in different ways but count on the long-term unpaid work of activists and engaged individuals. Although many of such initiatives strive for expanding the sphere of the commons, and thus produce a counter-narrative to neoliberal ideologies, reliance on such participation might run the risk of shifting responsibility from the public sector to the people, and of privileging the participation of some (more available, more accessible) groups over others.

In the case of bottom-up projects, one of the most common observations in this regard is that people cannot afford to “pay into” participatory/community-led projects or cannot dedicate time away from work or their dependents. Direct participation processes demand commitment, so a diversification of participation options (i.e. through email, in organized workshops, and digitally through participation apps), including monetary compensations and childcare options, can all facilitate participation and achieve more inclusive outcomes (procedural & representational justice).

It is often the case that the most vulnerable groups are those excluded from processes that will dictate their outcome upon them and without accounting for their needs, vulnerabilities, identities, or preferences (recognition justice). As a result of this institutional barriers to participation, in the fight for social justice it is people from those groups who decide to raise their voices and organize. In anti-gentrification struggles for example, those involved in grassroots movements are often “low income, marginalized people struggling to survive day to day,” making bottom-up efforts potentially “exhausting personally for individuals with other everyday life commitments to take care of” (responsibility and intersectional justice).

Whereas they can be facing the same constraints of resources/time, community organization is often the most effective way of achieving justice in the city. In Manhattan, NY, for example, the mostly Latinx and Afro-American communities protested a development-oriented zoning plan that would essentially gentrify East Broadway [1]. By doing their own engagement projects to understand the needs and wants from the diverse communities, the environmental issues but also the issues of crime and of the business ecosystem in the neighbourhoods, and recommended plans that included the redevelopment of a park, the strengthening of the local economy, and ensuring waterfront access. A group of communities also put a lawsuit against the rezoning plan, supported with the own zoning studies, and as of December 2019, they managed to strike down the plan [2],[3] [UrbanA Arena insights].

In 2011, after an exchange program with an NGO in Brazil, the Centre for Budget monitoring and Citizen participation (CBB) was founded in the Indische Buurt, in the Eastern district of Amsterdam. This consists of (1) a community-initiated stream that practices budget monitoring and formulates its own priorities, and (2) a municipality-initiated stream which uses an online application that provides financial data information to the public, at the level of the neighbourhood. As the TRANSIT project reports, these contribute to budget transparency and accountability at local level as well as participatory decisions on which neighbourhood projects to prioritize.

However, in 2013, according to one of the project interviewees the CBB decided to let go of the “human rights” perspective in their discourse and aims.It meant that city authorities had more flexibility in adapting the participatory budgeting initiative in the context of austerity policies. This, arguably, stripped the initiative of its more radical potential for making social and environmental justice a priority. Linking also with issues of unfit institutions, this removal of “human rights” approach was claimed to have worked in favour of upscaling of the initiative in cities across the country.

In the case of the Indische Buurt budget monitoring has changed the way the district plan was developed: in co-creation with citizens. In 2015 a resolution was accepted in the local district council stating that in 2017 20% of the local budget should fall under the responsibility of residents. In terms of procedural justice, concerning the initiative itself, involved stakeholders mentioned that participation in the activities was characterized by only a few people who had the time to engage in the process and persevered in understanding financial documents. Even though efforts were made to make the reading and understanding of the budget as easy as possible, it still seemed to be an ‘elite’ that participated. This raised questions whether the group was or should be representative. Someone feared this process was used as a legitimization for already made decisions, while another felt that s/he contributed to decision making. [Source: TRANSIT project] 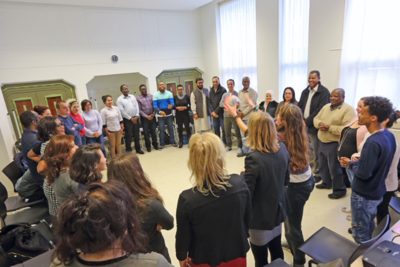 Photo by The Hague Academy for Local Governance. Inclusive citizen participation in decision-making processes promotes democracy and is crucial to the success of sustainability initiatives. Above, a diverse group of participants from different countries, sectors, and levels of government, discuss experiences and challenges at the Citizen Participation and Inclusive Governance course in the Hague.