"Unquestioned Neoliberal growth and austerity urbanism" as a driver of injustice refers to processes of privatization, commercialization, budget cuts and state withdrawal from various sectors and how they can undermine urban sustainability, guided by an ideology of unfettered economic growth which often aligns with austerity policies.

Unquestioned neoliberal growth and austerity urbanism expresses itself both in blatant, often large-scale, deregulation, privatisation and/or commodification of natural resources, public assets or services, common-pool resources or life aspects, and through more subtle processes of downscaling the responsibility of (collective) welfare onto individuals and non-governmental organisations (Castree, 2008[1]; Heynen et al., 2006[2]; Kotsila et al., 2020[3]). Both processes result in the replacement of the oversight of the public sector by democratically accountable entities through new the private sphere management (Swyngedouw et al., 2002[4]). 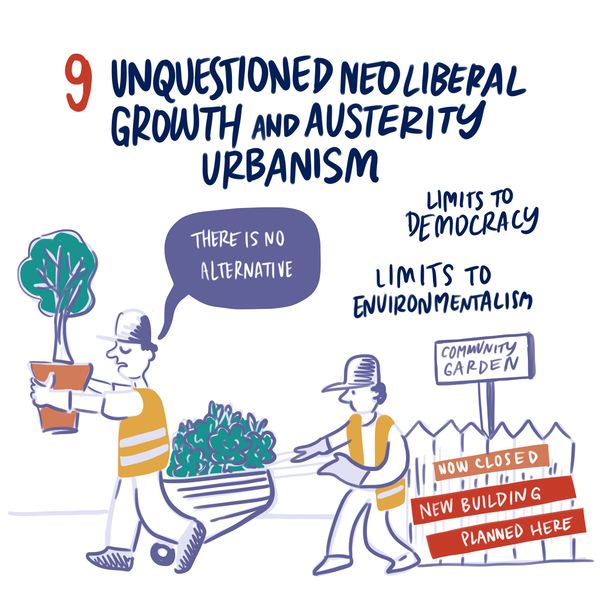 The seek for continuous GDP growth in capitalist economies created urban mindsets and policies which are based on the assumption that the benefits stemming from that growth will trickle-down to the overall population; everyone will benefit. However, increasing inequality and continued environmental injustices around the world testify to the falsity of this assumption. This mantra of economic growth, however, characterizes economic thinking at most levels of government, and thus shapes neoliberal austerity politics in cities. In the realm of urban sustainability, particularly, it is not seldom that neoliberal growth imperatives and austerity narratives of “there is no alternative”, accompany a number of policy changes and interventions.

This is evidenced both as an identified element of injustice that stands in the way of sustainability efforts, but also as part of the politics and discourse in which projects themselves are embedded. This applies to, and impacts, both existing green/blue urban nature and the future creation, protection or management of sustainability infrastructure. When, for example, responsibility for sustainability is left to civil actors and non-governmental initiatives, it may also escape the democratic sphere and limit participation. Therefore, and relatedly, it is often the case that “alternative” imaginaries of change, transition and transformation are inhabited by a limited fraction of few (privileged) groups (imaginary, hermeneutical and recognition justice) (Argüelles et al., 2017[5]).

Neoliberalism is exemplified through the privatization/commodification of public space for the creation and/or maintenance of environmental amenities like parks, riversides, docks and beach fronts (distributive justice). Since most green spaces are costly to maintain, cities with limited budgets may outsource their maintenance to private companies, citizen/inhabitant associations, or gardening groups, as has been seen in UK cities such as Bristol or Manchester. In another example, when urban sustainability initiatives are tied to private development, it is commonly the case that the logic of privatisation short-circuits the potential for just outcomes: new developments are directed mostly to elite buyers and green space becomes an enclave. In distributive terms, public space can be taken away from the working classes for private leisure purposes (Kiss et al., 2019[6]; Prentou, 2012[7]).

Neoliberal austerity urbanism also often impacts institutions of different scale in distinct ways, hampering the potential of city-level sustainability initiatives. A few years back, for example, the city of Amsterdam performed a municipal reorganisation, which meant that budget authority became more centralised and districts lost budget and substantial policy-making power (Wittmayer & Rach, 2016[8]). One of the main problems relating to the neoliberal growth imperative is the way in which economic growth, in terms of GDP, is prioritized over other goals within sustainability, especially in times of crisis. In contrast, proponents of degrowth argue that obsession with growth is the problem within sustainability, and that only a planned slowing down and equitable transformation of the economy can bring about the desired social and environmental change (Kallis, 2011[9]).

Neoliberal austerity versus community gardening in Carnisse, Rotterdam, the Netherlands

The southern neighbourhood of Carnisse in Rotterdam with 11,000 inhabitants, many of which immigrants and newcomers, is one of the forty most ‘disadvantaged neighbourhoods’ in the Netherlands. There, an urban garden was initiated in 2011 as part of a regeneration initiative (the Resilience Lab) to achieve urban sustainability and place-making. Although the garden was shut down in 2012 by the Municipality due to budgetary cuts, it revived later as a community garden after continued efforts from below. As one respondent of research conducted within the GUST project said:

“Crops, herbs and flowers were cultivated by and for the residents. These were traded to those who helped out with the garden (guiding principle of reciprocity) and were given away to people in need (in shelters, food banks, etc.). Primary schools organized educational activities, elderly homes organized activities in the garden, and ex-addicts were helping in the garden and in return, got vegetables to cook with for their shelters.” (Frantzeskaki et al., 2018[10]).

Nevertheless, again, in 2015, the garden was shut down and the land where it was standing got sold by the municipality to a private developer. An issue of distributive, as well as intersectional and relationality-inspired injustice, vulnerable residents of the Carnisse neighbourhood lost not only access to a green space but also the sense of community and place, and the multiple (physical and mental) health benefits that involvement with food cultivation in cities is known to bring. [Source: GUST (Governance of Urban Sustainability Transitions)] 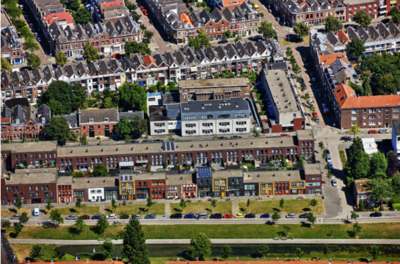 Photo by Peter Elenbaas/HH, www.groene.nl. An aerial shot showing new construction in the Carnisse neighborhood, in Rotterdam, the Netherlands. Dubbed one of the worst neighbourhoods in the country, it has been targeted for numerous redevelopment and community improvement programs, including a community garden project that closed down due largely to budget cuts and state withdrawal.