"Material and livelihood inequalities" as a driver of injustice refers to the ways in which the underlying distribution of economic resources gets expressed within urban sustainability efforts, reinforcing or exacerbating unjust outcomes.

Historical processes of oppression and marginalization often leave socio-economically vulnerable groups without the necessary resources to achieve a just level of wellbeing. Lower-income populations, specifically, often suffer from worse quality living environments and exposure to pollutants because they are seen as less able to mobilize political resistance, or because of their land is often cheaper, easing “access” for industry to locate facilities in their vicinity (Mohai & Saha, 2015),[1]. At the same time, it is often the carbon-intense lifestyle and consumption patterns of upper-class residents that is overall most polluting and environmentally damaging, despite their access to more efficient sustainable technologies, such as electric cars or solar panel roofs (UrbanA Arena insight). This is challenging the assumption of equal or just distribution of sustainability interventions and their benefits (Foster, 1998[2]; Maantay & Maroko, 2018[3]; Taylor, 2014[4]). 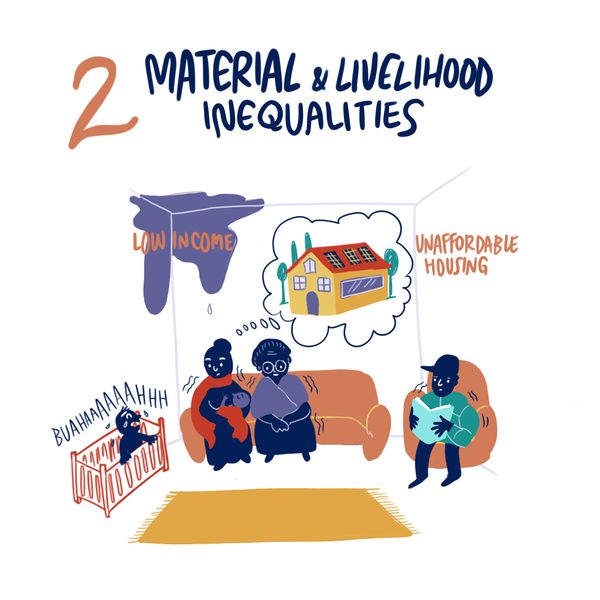 The problem of persistent low incomes and wages amongst working class residents and other marginalized groups is both a manifestation and a driver of injustice (distributive justice). Research has shown that income inequalities are growing in cities, with higher income neighbourhoods having economically prospered over the last twenty years while lower-income ones have stagnated or lost economic power (Bailey et al., 2017[5]; Chen et al., 2012[6]). Income inequalities can restrict the efficacy of urban sustainability initiatives, by, for example, restricting mobility/transportation capabilities or reducing access to sustainable amenities like redeveloped, retrofitted, and/or more energy efficient housing (Malmusi & Borrel, 2015[7]; Thomson et al., 2017[8]). In fact, in the case of energy retrofitting, increasing real estate prices can even force the displacement of low income residents (Ahas et al., 2019)[9]. More broadly, income inequalities may often result in people’s daily concerns being, or appearing, disconnected from sustainability goals (UrbanA Arena insight).

Uneven consumption and purchasing capabilities are both drivers and manifestations of injustice. This inequality represents a dysfunction in the economic system: they create inequalities for consumers, while also limiting the potential for small-scale local producers. Small-scale urban food producers, for example, struggle to compete in a globalized food market, and farmers specifically are not able to access and secure land for cultivation. These constraints limit both their own livelihood and the accessibility to fresh, locally produced, healthy food in cities (do Rosário Oliveira, 2014[10]; Säumel et al., 2019[11]; Wascher et al., 2015[12]).

In another example, energy transition initiatives in cities like Rotterdam are trying to link energy transition with energy saving goals, but often the people that could benefit the most from energy savings are the ones excluded from the process of implementing this transition. Access to solar panels and refurbishing is restricted by economic means. Beyond individual household level, city renewal processes also often create spaces where sustainability is celebrated (e.g. farmers markets, organic food shops) and implemented in practice (e.g. LEED certified buildings, green roofs), but end up being exclusive and not catering to the majority of local residents who do not feel welcome and/or cannot afford to shop in such places (UrbanA Arena insight).

Unaffordable housing/real estate is a central element of the struggles contained within urban sustainability initiatives. As a result of unregulated market prices in the sector, some more attractive (often green or sustainability-inspired) neighbourhoods can become exclusive. Previous research in real estate economics has already indicated that the creation of gardens and parks enhances the desirability of a neighbourhood – even before their construction – and eventually contributes to increases in property values and luxury housing constructions (Gould & Lewis, 2016[13]; Immergluck, 2009[14]).

The proliferation of more expensive neighbourhoods often comes hand to hand with the deterioration of lower-class and marginalized areas, as part of urban densification and exclusionary urbanization processes (URBAN GreenUP, 2017b)[15]. The financialization of housing as a means of accumulating capital is seen as core contributor to housing unaffordability, shaping inequalities and injustices in cities today and exacerbating the challenges for sustainability derived from housing costs (Säumel et al., 2019)[16].

Scarcity of green space and affordable housing in The Liberties, Dublin.

The Liberties, an historic, densely populated working-class neighborhood in Dublin, endures environmental inequalities when it comes to the availability and quality of green space as the least green neighborhood in the capital city, while also experiencing a severe housing shortage. The need for green spaces and adequate housing are two ‘crises’ that impact long-term, vulnerable residents, and have also been at odds with each other when prioritizing development strategies. In response, in 2015, the Dublin City Council (DCC) published the Liberties Greening Strategy to increase access to green infrastructure and address residential needs. Although the Strategy is not legally binding, it spurred the development of two parks: Weaver Square Park and Bridgefoot Park.

Weaver Park was the first ‘successful’ new park inaugurated in 2017, but social conflict arose when developers wanted to build new housing units on adjacent land occupied by community gardens. Activists claimed that the gardens had high communal value and that the number of units would not be enough to address deeper housing problems; however, DCC called it an “emergency situation” and proceeded with the construction of housing.

The plan for Bridgefoot park, on the other hand, includes space for gardening and claims to be inclusive in its design and implementation. However, it has repeatedly disrupted community gardening activities and the plan has been delayed, with construction only recently started in early 2020.

In sum, despite the communal benefits of new green spaces promoted by the Green Strategy, the latter has been linked to a rapid rise in high-end construction, increasing the value and desirability of the neighborhood, especially so for tourists and international students, thus leading to an acceleration of gentrification and the ensuing displacement of residents. 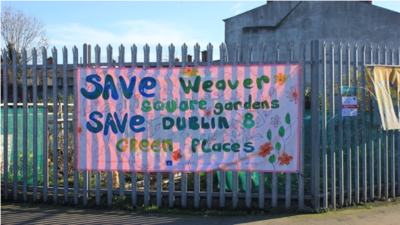 Photo by BCNUEJ (www.bcnuej.com). Adjacent to Weaver Square Park, the Libertines, a city-backed development project was proposed to build new housing units on land occupied by community gardens. Despite the communal value of the space, Dublin City Council called it an “emergency situation” and proceeded with the construction of council housing.

For sustainability initiatives to be closer aligned to the realities and needs of lower-income population, and to have some potential in addressing inequalities as drivers of injustice, more focus and consideration needs to be given to make such initiatives affordable but also more inclusive and participatory. While, for example, financial incentives for sustainable practices or a basic income are promising means to address material inequalities, some have noted how top-down sustainability interventions can be imposing on local/minority cultures and ways of living. This is why meaningful and long term participation is key for truly addressing socio-economic inequalities.