Commit to a meaningful participation process 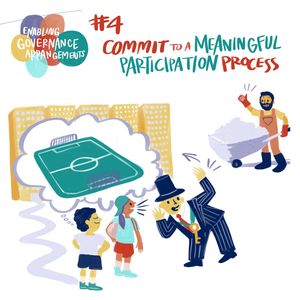 Commit to a Meaningful Participation Process

Meaningful participation means that citizens’ inputs are seriously considered in inclusive design and governance processes, that they visibly shape initiatives’ outcomes, and thus can influence the status quo in urban sustainability and justice. Such a process is also cognisant of who is invited and capable of participating, since otherwise it runs the risk of becoming a further driver of injustice. Committing to a meaningful participation process is important for both municipality-led and community-led initiatives. Depending on the topic, meaningful participation might mean something different. For mostly technical topics (e.g the building of a Storm-water system), the goal of a meaningful participation process could be to create a dialogue with residents to give the possibility for expressing potential doubts and misconceptions. This might then offer the opportunity and resources for residents tobe made co-responsible for other aspects of the project. Participation processes have to be aware that engagement might decline over time if no physical outcomes of the participation can be seen in the area. Additionally, institutions have to commit long-term to the process in order to build up trust and give residents the belief that their own time and energy investment is not wasted but is part of a long-term vision to change the area positively.

1. On the side of municipality

The citizen-led Vauban Forum was invited to participate in the “Vauban city planning council” (a consultative committee within the city council) which indicates that the municipality recognizes citizens as legitimate partners in the project development (Q15 & Q22).

In Augustenborg, all physical changes were discussed in advance with residents, giving them the possibility to express their suggestions and observations, thereby having the possibility to adjust and modify the plan. All actions were agreed on together with residents. Some aspects of the project were co-designed by residents, as they were considered as experts and bearers of specific and territorially grounded knowledge. In total, approximately, approximately 20% of the residents participated in the project. Several of their ideas were implemented into the neighbourhood, such as developing the open storm water system in a more natural process that enhances the area’s urban biodiversity (Q14). Key here was to strike a good balance between short-term change of the area (where residents see fast changes as a result of their own participation) and long-term commitment of institutions (so residents see a bigger vision behind the project and feel like their time and energy will contribute to something greater) (Q23).

2. On the side of civil society

Citizens have been the founders and drivers of the intervention from the very beginning. The intervention’s cooperative structure relies upon community engagement in order to function (financial investment, regular meetings, decision-making etc.) and the intervention engages with a wider community base in order to address energy poverty and provide opportunities for employment and learning (Q14). Additionally, further consultation with local residents informed the initiative’s problem definition (deliberative approach), and hands-on involvement (practical approach) in the creation of solar panels and internships led to increased interest and participation (Q24).

Future building residents are essential actors in the planning process. From a very early stage they are central in visioning and realizing the creation of their future community land trust home. Furthermore, residents make up one third of the Trust’s board members (Q.14).

To make the project more inclusive, project proponents developed two types of participation methods and invited residents to engage in a more deliberative one (e.g. visioning the district) and more practical one (e.g. developing activities in the community center and community garden).

BEB would not have been able to establish and grow the way it did without the contribution of volunteers. Most are students, mainly graduates from the field of renewable energies, but there are also retirees who want to use their free time to help the cooperative. According to an interviewee, “Among the most important factors for the cooperative being alive and working to realize its goals is that we have a lot of people as volunteers giving their time and putting in their efforts [...] The two general managers are essentially doing what needs to be done from coordinating all the activities to implementing new ideas and doing all the nitty gritty and everything. However, that wouldn’t have been possible without the larger membership base that is gradually increasing”.

Committing to a meaningful participation process should help overcome one driver of injustice previously explored by UrbanA, Limited citizen participation in urban planning. This refers to the limited involvement and engagement of citizens and citizens’ initiatives in decision-making around the planning, design, implementation and/or evaluation of urban sustainability-oriented interventions. By increasing the opportunity for serious consideration of citizens’ needs and desires, as well as providing the chance to take an active part in shaping initiatives, the status quo of urban sustainability and injustice can be called into question. This also means reducing barriers to participation for specific marginalized groups, such as single parents or low income individuals, by providing childcare options or some form of financial compensation for their time. This effort can help increase procedural and representational justice in urban sustainability governance.

In Vauban, housing was primarily accessible to homeowners rather than to tenants. Indeed, about 76% of the district is dedicated to homeowners (including cooperatives). However, becoming an owner is not accessible to everyone because it entails very high entry costs. Additionally, building one's own house takes a lot of time (at least 5 years), which not everybody can afford (Q14)

Under Covid-19, in-person activities have been severely restricted, which naturally limits participation processes. While online methods such as participation apps, surveys, and video conferencing may be able to make up for some of the loss, and possibly make participation more accessible for some, like for example, mobility-impaired individuals, the lack of in-person gatherings makes meaningful and truly inclusive participation processes more challenging. This is especially true for participatory initiatives which include, and/or rely on, collective in-person involvement from volunteers.