Make space for adaptation and experimentation 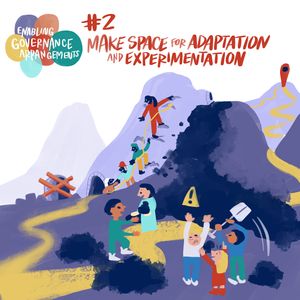 Make Space for Adaptation and Experimentation

Adaptability within initiatives for sustainable and just cities means leaving space for careful modifications and detours along their path to fulfilling overarching visions. In other words, initiatives may benefit from continuously and collectively deciding how much they are willing to adapt their plans based on new information and circumstances. Therefore, adaptability requires regular internal reflection amongst initiative proponents on shifting political, social, ecological and economic conditions, as well as on new developments and knowledge from within the project. Openness to adaptation entails striking a balance between unresponsive devotion to pre-set agendas and a lack of persistence with decisions that have been made. A reflexive approach to adaptability can support initiatives’ efforts to remain viable, gain influence, and stick to their transformative ideas. In many cases, a rudimentary level of adaptability is required to keep initiatives afloat amongst disadvantageous circumstances, such as the removal of important subsidies. In others, flexibility in short-term agendas may allow initiatives to take advantage of beneficial windows of opportunity. While this type of adaptability is reactive, many innovative experiences benefit from proactively adopting an experimental approach to project design and implementation. An experimental mindset uses a “probe and learn” approach and allows room for mistakes and new developments, while still working towards long-term visions. Such a mindset can be embodied in an organization’s culture and structures. A critical mass of initiative proponents who uphold an experimental ethos will allow for more learning opportunities and creative ways to tackle seemingly unchangeable injustices and unsustainable practices.

Regeneration of a deprived neighborhood in Rotterdam, Rotterdam

Project proponents (mostly local organizations) had an overall vision of the project development but it was not set in stone. The idea was to translate an existing methodology about transition management and to make it custom fit to the local context. For instance, the creation of a community center was not planned in advance and was envisioned and initiated by local stakeholders (Q27 & Q28). The project consortium was given a “carte blanche” for developing and experimenting the Resilience Lab. Whereas most funded projects are predefined and have to follow a pre-established framework, the freedom given to the consortium partners enabled them to progressively develop and adapt their methodology to the local context. This freedom was crucial to the success of the Reliance Lab (Q13). The Resilience Lab - was thus a “test bed for new methodologies and innovative practices” (Q17).

An experimental approach was crucial; not being too uptight and learning from mistakes. This allowed for a lot great degree of adaptivity in the project (Q20). In the beginning of the project, many people shared this experimental mindset. But However, when certain people were no longer involved in the project (e.g due to changes in department heads) and were replaced by others without this mentality, flexibility and adaptivity started to get lost in the chain of command. Flexibility in project implementation thus disappeared when the critical mass of people no longer held a shared sense of responsibility and were more afraid of making mistakes (Q20).

When Vattenfall filed a lawsuit against the government's decision on remunicipalisation, there were high chances of the situation disfavouring BEB. Thus, to stay relevant and for achieving their overarching goal of green electricity production and provision, BEB is reinventing itself and working on numerous other projects including solar energy production. A BEB representative in an interview stated, ‘...adapting to the circumstances is very important because overtime ... circumstances change a lot. You have to constantly reflect whether your vision is still relevant and up to date and do we need to adapt and can we carry on' (Q25).

While they try to develop standardized procedures when possible, the Land Trust team claims that it is essential to reflect upon and adapt to internal learning and external change: “We are constantly reflecting on things... For every part of the operation we regularly rethink how to do it. This happens at the level of the team, and also on the level of our working groups, partner associations, experts and other stakeholders, and the level of our board." (Interview with De Pauw) (Q26a). Furthermore, from the beginning, the Brussels Capital Region, a major financial supporter of the Land Trust, was responsive to the initiative’s interests, allowing it space to develop its innovative ideas (Q20).

Co-creation of a sustainable neighborhood in Freiburg: From Q15 “The municipality also implemented the principle of “Planning that Learns," meaning that pilot initiatives would be experimented before being widely enforced. A prime example of this principle is the mobility concept of Vauban, which was first operated in one third of the district before being implemented in the whole neighborhood (Interview with A.).”

Adaptability in project design and implementation allows for responsiveness to changing social and economic conditions and better-positions initiatives to meet the shifting needs of those it serves. This governance arrangement attempts to address unfit institutional structures. The “unfit institutional structures” that were identified as a ‘driver of injustice’ refer to the strict top-down approaches which limit knowledge generation and exchange, and to rigid bureaucracies and regulatory barriers which often result in sustainability policies that fail to address the realities of vulnerable residents. Furthermore, experimental mindsets may allow for more innovative thinking around how to tackle injustice, based on ideas from various actors, including local residents. This could help in finding solutions which would not arise from more risk/mistake-averse approaches to project design and implementation.

When initiatives adapt too well to an environment that is structurally unsustainable and unjust, they risk to lose their transformative potential and integrity, e.g. as a ‘counter model’. Calls for adaptability can also help to pursue other agendas under the disguise of vague commitments to sustainability and justice. Due to flexibility in the design and implementation also unanticipated costs and challenges may incur. Furthermore, projects working with vulnerable groups may be more risk averse and try to minimize risk and experimentation as to avoid harming these people (i.e. low income residents developing social housing, can’t allow room for mistakes) (Interview with De Pauw). It is rare that initiatives receive funding with “no-strings attached”, and instead most funded projects are predefined and have to follow a pre-established framework, consequently limiting adaptability. Therefore, funding may be contingent on measurement of progress with regards to reaching predefined goals. While stoically sticking to a preset agenda might limit creative opportunities for overcoming problems, being “too flexible” could give an impression of incompetence and disarray, therefore reducing stakeholder confidence and commitment to the project.

This governance arrangement is essential for initiatives operating in the context of COVID-19 – a time of great economic and social uncertainty. The global pandemic necessitates a basic level of flexibility, as adaptation of many aspects, from daily activities to long-term strategic planning, may be essential for a project’s survival. Going forward, this situation presents a strong case for “building-in” opportunities for flexibility by leaving space for contingency plans, and encourages an experimental mindset to explore new ways of flourishing under vastly different circumstances.