"Weak(ened) civil society" as a driver of injustice refers to the ways in which collective civic groups that share common interests (other than the state, the market, or the family) are either not constituted and impactful enough to influence and benefit from sustainability efforts or are indeed constrained by interventions that carry sustainability objectives.

Weak civil society can lead to the systematic exclusion of certain groups or individuals from sustainability-oriented initiatives, reflecting into a decreased capacity for uptake and just implementation of such initiatives (Morrow, 2019[1]). Lack of existing community organisation can be an obstacle for meaningful participatory processes, both because citizens are less informed and prepared to enter into such dialogues, and because input is not “digested" through the different levels of organization and representation that a rich civil society network can offer.

Issues of race or ethnicity and participatory processes can here intersect, as often multilingual societies (or neighbourhoods) may fail to meaningfully include linguistic minorities (and disadvantaged groups) in deliberation processes (procedural and representative injustice). Language restrictions may also limit access and the feeling of ownership to such programs. 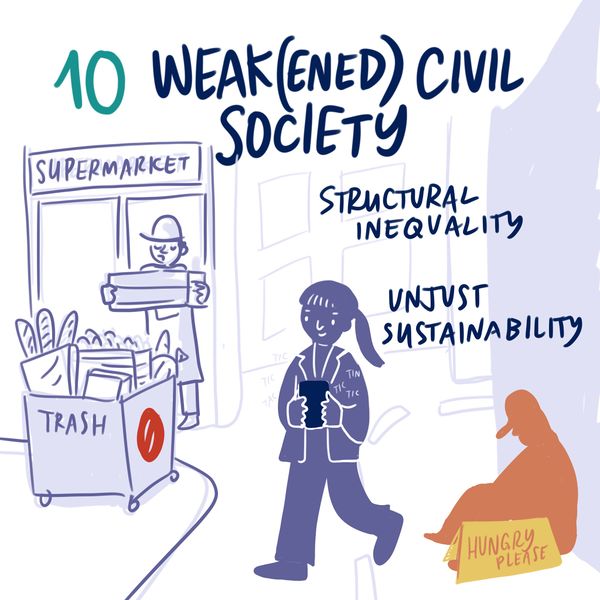 A current trend in urban governance as well as in research on urban sustainability, is seeking participation and the transmission of ideas through co-creation processes, innovation/experimentation/living labs, and similar ways that facilitate the formation of ‘communities of practice’ and ‘rootedness’ in existing place-based communities, as a form of advancing a more plural civil society for sustainability (SmartEnCity, n.d.[2]).

However, it is also often observed that sustainability-related practices of civil society end up being exclusive, because they are embedded in wider systems of structural inequality. Even, for example, in explicit social justice movements organization, participation can be challenging for low income and marginalized communities with more pressing daily struggles (responsibility justice). Furthermore, strong emphasis on individual or community organising and stewardship for sustainability risks falling into the trap of so-called “roll-out” neoliberalisation processes, whereby the state withdraws from essential provisioning functions and this responsibility falls on the shoulders of citizens (see Driver 9 Unquestioned Neoliberal growth and austerity urbanism).

A common issue faced by many civil society led projects is the short time frame of support they receive from formal institutions. This poses serious obstacles to their longevity, as people lose motivation and interest in continuing to participate (Argüelles et al., 2017). A typical example of such short-lived civil society initiatives are urban gardens (although some of them have remained for many years), as their need for land and temporary occupation of empty plots, puts them in a particularly vulnerable position when grey urban development becomes economically feasible and/or profitable.

In sum, the status of, and challenges faced by, civil society are often a good barometer of the extent to which justice issues can be incorporated into urban sustainability initiatives in the context of a wider institutional structure premised on democracy.

Successful sharing initiatives require a strong and organized civil society, and it is not uncommon that governance practices, “informed by different risk ontologies and understandings of the common good/hazard of food”, are at odds with the everyday food sharing practices. In Berlin, for example, a decentralized, volunteer-led organization came into conflict with the Berlin Food Safety Authority over the possible health risks of public fridges. The collective ownership framework of the initiative was also an obstacle, given that German regulations do not legally recognize a status of shared responsibility.

The conflicts revolving around food sharing have highlighted the contradictions of governing food as a “privately owned public good” and the failure to develop commons-based strategies for risk management (Morrow, 2019, p. 210). With threats of “privatization and individualization of responsibility”, the future of food-sharing is dependent on communal persistence and participation. The principal investigator of the SHARECITY (Sustainability of city-based food sharing)project, describes how communities can come together and reclaim urban spaces for food production:

“In a world where it can sometimes feel like we are increasingly being pitted against each other—individual against individual, community against community, nation against nation, people against the planet—food sharing initiatives demonstrate that there are other ways of acting and of being together.” [Source: [2],(SHARECITY, 2019[3])] 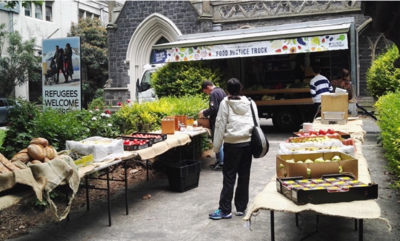 Photo by Ferne Edwards/SHARECITY. Community-based initiatives that link to sustainability efforts, such as the food-sharing program shown above, may engage with radical claims and enhance social justice, but can also be difficult to implement and sustain, thus limiting the overall impact.