"Uneven environmental health and pollution patterns" as a driver of injustice refers unequal exposure to harmful and health-impairing pollutants, conditions and urban environments and/or unequal access to safe and healthy environments. 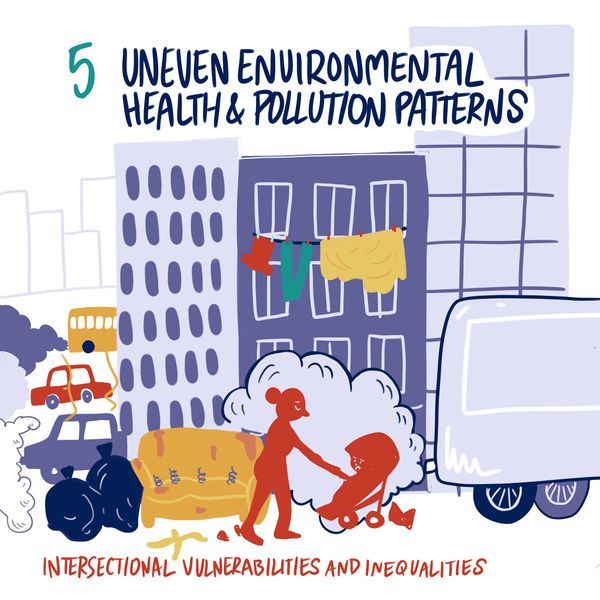 In many cases the production of hazardous environments inhabited by vulnerable people is the consequence of Exclusive access to the benefits of sustainability infrastructure(Driver 1) and Uneven and exclusionary urban intensification and regeneration (Driver 4), whereby privileged groups tend to move to neighbourhoods characterised by healthier, greener, and safer environments while other areas become “social dumps” characterised by pollution, crime, unwelcoming public space, and disease where marginalized residents are displaced (Anguelovski, 2016[5]; Armiero & D’Alisa, 2012[6]). Apart from a manifestation of injustice in cities, these neighbourhoods and their inhabitants can become stigmatised, “ghetto-ised”, and systematically unrecognized and excluded from conversations about urban sustainability and health (participatory & recognition justice).

In addition, in the case of urban energy poverty, poor households in Europe have adjusted their daily behaviours by resorting to burning unsuitable and unsafe materials in their houses in order to keep warm or by turning on their stoves as a source of heat, which contributes to new health and household hazards. This behaviour has come as a response to rising fuel prices and austerity policies, leading to intense air pollution inside homes and all around entire neighbourhoods (Thomson et al., 2017[7]).

Inaccessible healthy food can be yet another driver of health injustice, impacting consumer choice and eventually the health of those who cannot afford to buy (or do not know where/how to find, or cannot physical access) good quality, healthy and fresh food. Here, providing access to healthy food in under-privileged neighbourhoods, through support of urban agriculture/community gardens, as well as through the set-up of local and healthy school canteen programs, can have many positive effects for vulnerable families and address food deserts and other markers of poor access to food (Anguelovski, 2015[8]).

Uneven environmental health is not only an issue of justice in distribution terms (who has access to healthy environments, resources or infrastructure) but also in terms of whether or not local knowledge of pollution patterns, disease and the relationship of those, is (or is not) acknowledged and taken into account by urban planners and decision-makers (hermeneutical justice). Exclusionary practices, imaginaries and discourses of local food activists embedded in “alternative” projects can also reproduce or exacerbate the exclusion of groups who do not feel represented or included in such projects (Argüelles et al., 2017[9]).

In sum, underlying inequities in terms of environmental health are both a target of urban sustainability initiatives and a structuring element of those. As health environments of cities are altered, direct changes in the socio-physical makeup of the city inevitably follow. Several dimensions of justice are at stake in the process of sorting out these interactions.

Campania, where Naples is located, is among the poorest and most densely populated regions in Italy. Beginning in the 1980s, the region has been facing a series of events surrounding the lack of waste collection and illegal toxic waste dumping. During 1994-2009, the northern part of Campania was even living in an “urban waste emergency” and the illegal disposal of hazardous waste has been continuous until the present (De Rosa, 2014). In 2008, residents from the working-class neighbourhood of Pianura fiercely resisted the reopening of a landfill that would further expose them to toxic pollution. However, with no regional waste management plan in place, this region's main landfill became overfilled with both hazardous and non-hazardous waste, with waste also exported to Campania from northern Italy.

This case speaks to uneven patterns of environmental pollution through waste dumping activities facilitated by and organized by the local mafia. It also attests to the historical and continued dumping of garbage near inhabited but marginalized areas of the South of Italy, causing high rates of cancer and other (unrecognized and often denied) health problems to the local communities. Findings also describe how “the explosion of violence was the result of making peripheries into ‘‘social dumps’’ as a consequence of the gentrification of the inner city”. [Source: LARES project [1], (Armiero & D’Alisa, 2012[10]; De Rosa, 2014[11])] 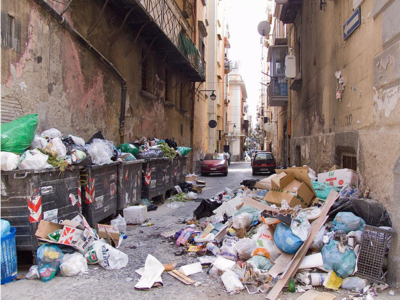 Photo by Chris Beckett/Flickr. The Naples waste management crisis has lasted nearly 40 years and threatens public and environmental health throughout the Northeastern part of the Campania region, earning it the nickname, the ‘triangle of death’.

Thinking about health equity and justice when planning urban sustainability interventions and policy, emerges as of core important for just and sustainable cities. Environmental health needs to be considered also in a more systemic and intersectional way: not only must we see the synergistic way in which health vulnerabilities are created in urban environments (including inequalities of access or unfit services and policies around urban mobility, waste management, healthy food, industrial pollution and housing), but also the global networks of vulnerability production relating to the economic activity, consumption patterns and externalisation of environmental health costs to vulnerable populations beyond the borders of one single city.