"Exclusive Access to Benefits of Urban Sustainability Infrastructure" as a driver of injustice refers to the ways in which territory, identity, education, knowledge, and information are used to draw lines (privileges and hierarchies) between social groups, and especially to how this leads to an uneven distribution of benefits from urban sustainability efforts.

Exclusive access to the benefits of urban sustainability infrastructure (e.g. parks, food cooperatives, green roofs, regenerated river fronts, sustainable mobility initiatives, etc.) is often the result of underlying conditions of inequality. The implementation of sustainability initiatives may expand, reinforce, or express these inequalities. This often refers to the vicious circle of socio-economically disadvantaged neighbourhoods being left behind in terms of access to (the benefits of) sustainable infrastructure. Sustainability is often portrayed as something optional, left to the market to regulate, and thus often ending up being a signifier of the urban elite. 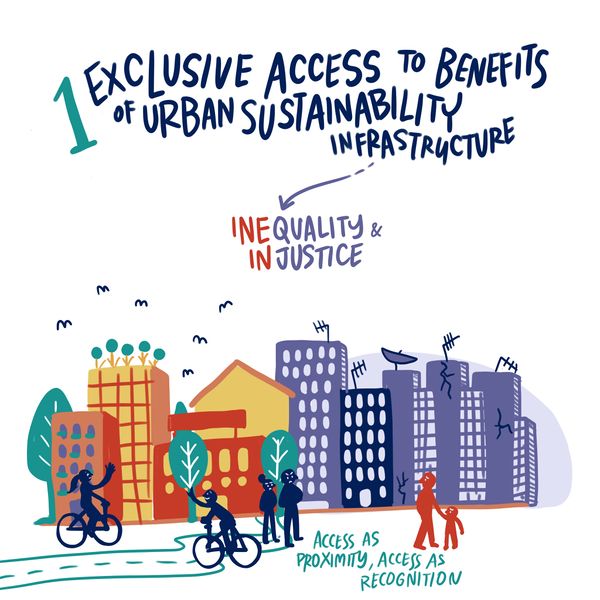 An issue of distributive justice, in relation to this driver, is the restricted access to green and safe public spaces of quality for lower income areas and minority communities, where access is shaped by both the amenity’s proximity and its perception by these communities as a welcoming and desirable space. In many underprivileged inner-city neighbourhoods, for example, green has historically been under-maintained, of lower quality, less numerous, and smaller in comparison to more affluent neighbourhoods (Heynen et al., 2006 [1]; Wolch et al., 2014[2]). In contrast, wealthier and white communities have historically enjoyed environmental privileges through the greater presence of nearby parks, coasts, and other open spaces in their neighbourhood (Landry & Chakraborty, 2009)[3].

One example of these tendencies includes the privatisation of urban spaces through sustainability -inspired or -enhancing infrastructures in formerly unavailable or public realm spaces, such as the case of Rotterdam’s waterfront and industrial zones, where entire areas are converted into high-quality green spaces and real estate private property with exclusive access for high-income residents. Les Pyramides, in Grand Paris Sud, for example, is a development built in the 1960s originally for middle-class residents, later becoming a migrant workers quarter as the middle-upper class moved to surrounding greener areas. In sharp contrast to neighbouring districts, many problems where not attended to for years in Les Pyramides (UrbanA Arena insights). In more recent years, this neighbourhood seems to have gone through a process of regeneration with new green public areas for sport and recreation [1].

Access is not understood as necessarily defined by proximity to sustainability infrastructure, but by its usage and/or accrued benefits for people with different socio-economic, racial, gender, age, or ethnic backgrounds. Access might thus be exclusive due to the (semi)private status of an amenity (e.g. a park, a garden, a green roof), or due to socio-cultural norms that create psychological accessibility barriers when certain groups feel unwelcome or uncomfortable in such (physical or participatory) spaces. Such unwelcomeness might be due to historical trauma and association of spaces with racist or gender/sexuality-based verbal or physical violence, or due to the domination of such space by other groups or activities. Several outputs point toward the importance of considering the intersectionality of such exclusions for vulnerable citizens. Women, for example, might suffer a combination of exclusions (based on class, race, or ethnicity) and related to their continued status as the principal care providers in society –a fact that is enforcing its own form of exclusion.

It is often the case that these exclusionary patterns lead to further injustices, when, for example, less privileged and stigmatized areas become the target of urban regeneration programs that end up changing their demographic composition (i.e. gentrification). In many cases we see processes of greening and sustainability spurring gentrification, by increasing the appeal of neighbourhoods but also property/rent costs (Wittmayer et al., 2015)[4]. Gentrification is thus built upon and reinforces historical patterns of injustice, by directing the flow of benefits away from socially disadvantaged groups, even when initiatives are targeted toward their neighbourhoods (Cole et al., 2017)[5]. In London, for example, new developments are reported as ticking all sustainability boxes, but small businesses run by members of minority groups being systematically overlooked in the overall city development. Those inhabitants are thus being made ‘invisible’, their economic and social activity overlooked and not included in sustainability assessments (UrbanA Arena insight).

Unequal access is not always spatially-bound, but can also refer to access to knowledge and information concerning decisions and processes that define the design, implementation, and assessment of success around sustainability interventions (Janoušková, 2013 [6]; Paris, 2013[7]). Some groups might in fact not be allowed to participate in design processes because their knowledge is not considered as valid of expert to contribute to projections of ideas or decisions.

Last but not least, access is closely associated with participation processes and dynamics (procedural justice) (Anguelovski et al., 2018, p. 431)[8]. This applies both to centrally designed interventions with limited input from citizens, and to community-led initiatives which might require time, energy, or financial resources that disadvantaged groups often lack.

In the city centre of Manchester, cycling infrastructure has been upgraded and expanded since 2014 with dedicated cycle lanes which are segregated from buses including in Oxford Road. This, however, has been criticized for being so far built mainly around the university campus and through a middle-class suburb, thus neglecting peripheral areas.

Although the cycling infrastructure was celebrated by many for its dedication to health and sustainability, it was proved to be designed for specific demographics, catering to the more affluent classes, including academics and young professionals. Since 2018, the municipality has claimed that its long-term plan is to create a more comprehensive cycling network across the metropolitan area, to get more people on bikes and on foot.

“The cycle path did not necessarily become the symbolism of gentrification and house prices and so on, but it did become kind of seen as this cycle line known through the knowledge quarter of the university and down through the urban suburb where the kind of cappuccino drinking liberals of Greater Manchester resided.” [PATHWAYS project; Personal communication]

Other examples of bike-sharing that only attends to specific and limited areas of a city, include the city of Budapest in Hungary, where the bike sharing scheme is only available for the inner city, leaving around 70% of the population without access. Similarly, in Mexico City bike sharing doesn’t reach those who face most challenges in terms of mobility, as the scheme is located in privileged parts of the city where residents use them to complement other mobility options such as private vehicles and public transport.

Some aspects that are increasingly recognised as important in order to reverse these trends and increase the potential of urban sustainability-related initiatives for social, economic and environmental justice include the consideration of specific desires and visions that residents, including the most vulnerable and marginalised, have with regards to the function and the future of their neighbourhoods, placing emphasis on processes of co-creation with civil society actors and bringing sustainability closer to the different realities and needs of local communities. For example, it is key to consider ways to create room for the development of multi-facetted identities in such processes, thus assisting and promoting dialogue between diverse local communities.