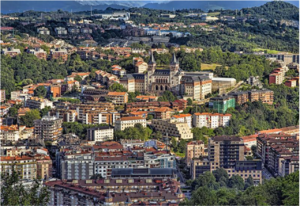 In 2017, the municipality of San Sebastián, Spain, initiated a participatory process with the aim to develop a local climate change strategy for the city and its citizens. The result of this participatory process is the 2050 roadmap: the “Plan de Acción Klima 2050 de Donostia/San Sebastián” (in English the Donostia/San Sebastián’s Climate Action Plan 2050). Another aim of the process was to raise citizens’ awareness of Climate Change and encourage them to take individual and collective actions. The plan has been approved by the City Hall on June 5, 2018. The roadmap has the overall vision to make San Sebastián city carbon neutral by 2050. The objectives included in the roadmap are also based on the 2050 Climate Change Strategy of the entire Basque Autonomous Community.

“The city of the future needs people like those who have made the city of the present a reality. Citizens who are responsible, active and trained to achieve global, changing evolution, which is only possible by means of strong values and social capital.” - Estrategia 2030 Donostia/ San Sebastián

The process of development of the roadmap is based on:

The results of both the study and the workshop resulted in the development of the 2050 roadmap. The roadmap identifies key sectors and associated objectives to be achieved in order to accomplish the overall goal to reduce CO2 emissions by more than 80% by 2050:

Those five strategic areas of action were then applied to four different sectors: Energy, Circular Economy, Land Use and Mobility. This exercise within the city’s roadmap resulted in a diverse set of actions that will enable San Sebastián to reach carbon neutrality by 2050.

The development and implementation of San Sebastián’s roadmap represents an innovative process promoting active participation of citizens and collaborative governance. This initiative represents an innovative way on how to introduce climate change objectives into the structures and cultures of a city administration. San Sebastián’s roadmap is an example of a municipality that it is redefining urban climate and energy governance and citizen participation and will hopefully inspire other cities to design and develop similar processes in their contexts.