"Racialized or ethnically exclusionary urbanization" as a driver of injustice refers to the ways in which historic patterns of segregation, based on race, ethnicity, religion or other identity characteristics, shape the outcomes of urban sustainability efforts.

Racial or ethnic injustices and inequalities are territorially experienced and expressed in spatial segregation patterns (distributional justice) (Arapoglou & Sayas, 2009 [1]; Kundu & Saraswati, 2012[2]; Musterd, 2005[3]). By segregation, we are referring to the systemic and, at least partially, non-voluntary separation of people in space according to racial or other ethnic group identity, and as a consequence, the creation of distinct versions of daily life.

Race, ethnicity, and immigration status are often used as markers for generating unequal integration of people into (urban) society. This may occur through spatial segregation, but also through cultural norms, financial rules, and infrastructure provision. In Europe, this process is marked by the isolation, ghettoization, territorial stigmatization, advanced marginality, and increased legal targeting of immigrants along a race-class axis (Wacquant et al., 2014[4]). 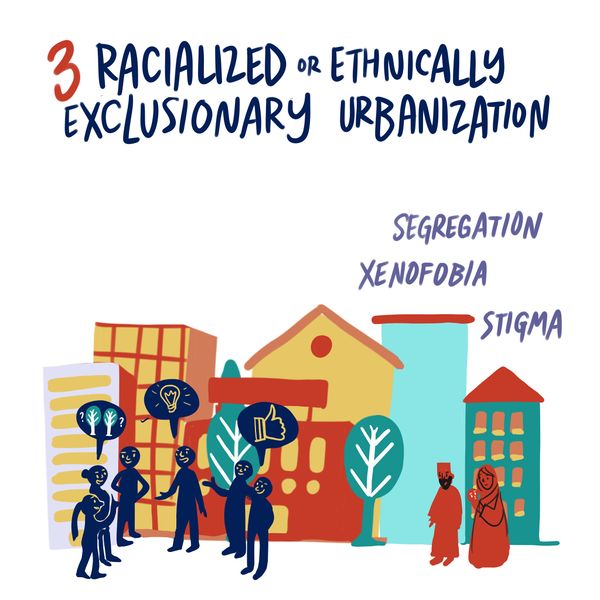 Neglect of and underinvestment in minority neighbourhoods holds the risk of translating into the deterioration of social welfare (e.g. in terms of uncontrolled crime, low quality of education facilities, low quality of public transportation infrastructure) as well as the increase of environmental health risks. Minority neighbourhoods often suffer from proximity to freeways, incinerators, or waste sites, in and around cities (Pulido, 2000[5]; Schively, 2007[6]).

Racial composition often correlates with historical contamination and waste dumping, as well as with low percentages of active green space available per resident (Anguelovski et al., 2018[7]; Cole et al., 2019[8]). Although accessible greening can act as an enabling factor for social cohesion (URBAN GreenUP, 2017a), it is arguably not given enough priority in historically deprived areas, which is where newly arrived immigrants and refugees usually first settle as they are seeking cheap rental conditions and proximity to jobs. Moreover, enjoying nature can be challenging for racial and ethnic minorities, as witnessed by many black environmentalists, geographers and birdwatchers. Minorities feel they are not welcome and are even exposed to violence [9], and this can be more severe in the case of women, who are exposed to racial and sexual violence in green spaces like parks.

Sustainable urban mobility may also be unequally accessible to racial or ethnic groups, due to lack of infrastructure, high cost, or poor access to information (Wirtz et al., 2019[10]). During the COVID-19 pandemic, for example, it was noted that public transport was used more by migrant workers and ethnically diverse people – who likely have no alternative means of transportation. This shows how race dynamics intersect with working class dynamics, and highlights the need for improving the number, quality and accessibility of transportation networks for essential workers. At the same time, it is noticed that alternative and more sustainable mobility solutions, like cycling, are very white- and male- dominated, with the planning of bike lines for example not contemplating the constraints that women of color are often facing (UrbanA Arena insights).

Inequality may often also result in exclusion from sustainability initiatives due to structural or participatory injustices that these groups are often subject to. In Berlin, for example, refugees were hesitant to participate in a programme that ‘saved’ food from becoming waste, because it reflected stigma on them [TESS, personal communication].

Santa Maria/Santa Anna–Tió is a working-class neighbourhood in Premià de Dalt, an otherwise high-income municipality in the vicinity of Barcelona. The neighbourhood residents, 17% of which are of African or Latin-American origin, have low professional training and young residents tend to not be integrated in the educational environment or the labour market. Immigrant women face serious problems in finding employment. The neighbourhood also suffers from housing deficiencies as houses are too small and have structural problems due to precarious conditions of construction. The unemployment rate in the Santa Maria/Santa Anna–Tió neighbourhood is around 16%, higher than the overall municipality and county rates.

The neighbourhood urbanized between 1960 and 1970, isolated from the urban centers and with little infrastructural planning, and today its residents suffer from housing deficiencies and energy poverty; houses are often too small, and many have structural problems due to precarious conditions of construction. The housing that is available is unaffordable, especially given the low wages of many of the neighborhood’s residents. Those who suffer from energy/water poverty are predominantly immigrant populations, with many families unable to pay electricity and water supplies, especially during and in the aftermath of the 2007 economic crisis.

Since 2012, A “Pla de Barris” has been proposed in order to improve public space, buildings, new technologies, urban sustainability aspects, gender equality, urban planning improvements, among others (Ajuntament de Premia de Dalt; Ajuntament de Premia de Mar, 2012). Although the financial difficulties were a limitation, the action has contributed to the reinforcement of identity and kindled a sense of belonging to the neighbourhood. 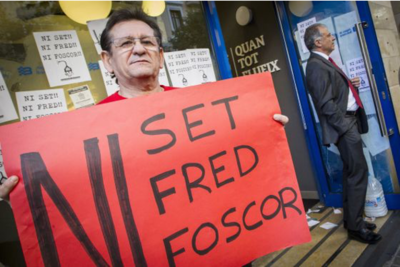 A man protests at an energy supply company in Catalonia. Racial and ethnic exclusion are core social markers of low wages, lack of access to affordable housing, and energy poverty.

Systemic exclusion and racism do not only foreclose possibilities for urban justice and sustainability, but for any kind of progressive future society. Urban planning and politics have a central role in addressing the injustices related to racial and ethnic discrimination, and the Black Lives Matter movement has highlighted these connections and interrelations [[2]]. Initiatives such as changing the name or symbology of monuments or the name of streets, for example, can help to make visible and normalize more diverse and decolonial voices into urban planning (UrbanA Arena insight).