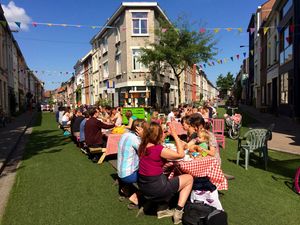 Belgian Streets Got Rid Of Cars And Turned Into Beautiful Parks. Photo by Lab van Troje

“Living Streets”– “Leefstraat” in Dutch - is a living lab, in which every year, between spring and autumn, residents can decide collectively to reclaim public space in the streets of Ghent. During this period, citizens can choose to close their street to traffic and organise different events and gatherings. This initiative aims to transform the urban and environmental challenges into new opportunities for the city and to create community cohesion. Living streets contributes to improving the city liveability by giving space to creativity, co-creation of new activities, and by turning the residents of Ghent into change agents in their own reality.

"Imagine that you could temporarily transform your street into a beautiful green meeting place for the neighbourhood… That is what a living street is all about!” - Living Streets Initiative

The implementation of the project is coordinated by the association “Lab van Troje”, which acts as a bridge between the municipality and the residents, promoting and facilitating the development of the process. One of the main challenges faced by the facilitators has been to find an alternative to street parking, in order to be able to replace parking spots with green areas. Residents worked on possible options with the Lab von Troje and proposed different transport solutions to go from a temporary parking space to the main streets. The initiative consists of two parts:

Living Streets generated new social dynamics in cities, with regards to social cohesion, mobility, sustainability and organisation of the public space. Citizens felt empowered: they were able to decide with their neighbours about what an ideal street looks like, and what is necessary to get there. The municipality and civil servants supported the initiatives of the citizens, the exchange of expertise and the experimentation with co-creation. Ghent’s experience has been used as a successful example to be replicated in other European cities, such as Brussels (Belgium), La Rochelle (France), Zadar (Croatia), Milton Keynes (United Kingdom), Turin (Italy), Ivanić-Grad (Croatia) and Rotterdam (The Netherlands).