Civil disobedience is a public, non-violent and conscientious breach of law undertaken with the aim of bringing about a change in laws or government policies.[1]

Everyone is cordially invited to contribute to this wiki page by writing their perspectives and examples about the given topic. This page is a part of UrbanA wiki which is an ongoing, open-ended online collaborative database and knowledge source for city-makers to tackle unsustainability and injustice in cities. Check out the User guide to find out more about how to contribute, including links to tips on formatting and editing wiki pages. 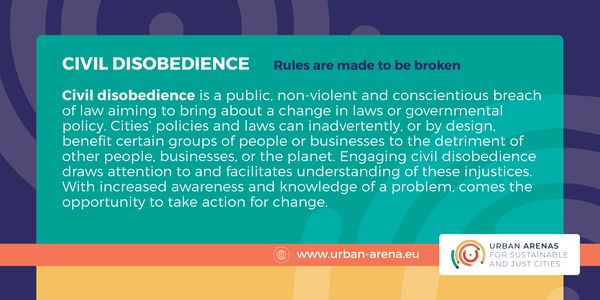 Civil disobedience is a form of direction action, which can communicate and illustrate a message more clearly than writing a letter or an article. Citizens use this tactic to confront perceived injustices of governments and corporations alike who often benefit from an imbalance of power. [1]

Civil disobedience is a form of public action in which people directly challenge traditional "rules of engagement" and call into question the moral frameworks shaping society. Scholars often think of it having four components - conscientiousness, communication, publicity, non-violence.

"There is more agreement amongst thinkers that civil disobedience can be either direct or indirect. In other words, civil disobedients can either breach the law they oppose or breach a law which, other things being equal, they do not oppose in order to demonstrate their protest against another law or policy." [2]

Cities' policies and laws can inadvertently, or by design, benefit certain groups of people or businesses to the detriment of other people, businesses, or the planet. Engaging civil disobedience draws attention to and facilitates understanding of these injustices. With increased awareness and knowledge of a problem, comes the opportunity to take action for change.