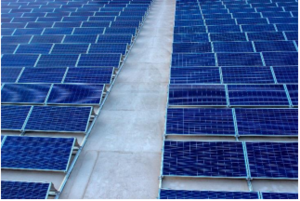 As a cooperative, citizens can be shareholders of COOPEM. In doing so, citizens benefit financially from the energy transition but more importantly decide on the strategy and actions of the cooperative. Photo by PN. Photo pretense

The Cooperative Energy Mouscron (COOPEM) was founded in 2017 by 14 citizens, two entrepreneurs, ENERGIRIS (a Brussels-based cooperative) and Aralia (an investor in PV), with the support of the municipality of Mouscron. Their aim was to make photovoltaics (solar power) accessible to the largest possible number of citizens and companies in the area of Mouscron. As a cooperative, citizens can be shareholders of COOPEM. In doing so, citizens benefit financially from the energy transition but more importantly decide on the strategy and actions of the cooperative. COOPEM has joined forces with regional development organisations Ideta and IEG, as well as the Energy IT company Haulogy, to create the project ColéCo. This project aims to stimulate enthusiasm and interest around the self-consumption of renewable energy in the 23 municipalities of Wallonia.

COOPEM is a cooperative funded by citizens, aiming to promote local photovoltaic energy as well as a financial alternative model for energy production for citizens and local companies. The Energy council member of Mouscron chairs COOPEM’s on behalf of the City, which demonstrates the municipality’s support for the cooperative and the city’s effort towards mitigating CO2 emissions.

As a cooperative, COOPEM offers two types of packages: for citizens and for local businesses.

The joint project ColéCo promotes the installation of solar panels on school roofs. The concept is that schools can make use of the energy during the day, while in the evenings the surrounding neighbourhood benefits from the photovoltaic energy produced. ColéCo is inspired by the new European legislation on renewable energy communities, which mentions the principle of coownership, and local production and consumption of energy. In 2018, after one year of activity, COOPEM has installed around 90 PV units and public awareness has been increased.

In order to replicate such projects, political support is key. COOPEM needs to establish a close collaboration with public authorities to carry out the ColéCo project, especially regarding the use of the public grid and the installation of solar panels on the school’s roofs. The initiative has a potential for replication in other cities. Other local authorities in Belgium are trying to adapt and replicate Mouscron’s model in their contexts.