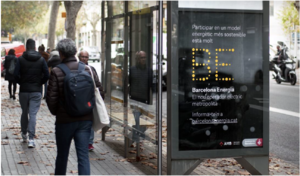 The BE campaign seen in Barcelona. Credits: Pexels

Barcelona Municipality has developed a wide-ranging strategy that aims at reclaiming energy sovereignty, fighting energy poverty and contributing to the energy transition through the creation of a municipal energy company. More specifically, the municipality of Barcelona, with the collaboration of the social movement ‘Barcelona in Comú’, initiated Barcelona Energia (BE) in 2018, a public renewable energy company. Barcelona Energia aims at contributing to the transition to sustainable energy by promoting self-sufficiency and favouring a locally produced 100% renewable energy supply. Private and public investments are used for installing solar panels on public and private roofs and other spaces (e.g. libraries, markets and civic centres). Since 2018, Barcelona Energia supplies renewable energy to buildings and facilities owned by Barcelona City Council and since 2019, also citizens are encouraged to invest in solar energy generation in their houses. Citizens are offered a range of tariffs for the production of their own energy and the most vulnerable residents are supported by the Municipality through subsidies.

“This initiative takes us beyond the traditional notion of public and makes democratization a foundational base. With people’s participation, transparency and accountability, Barcelona Energía is showing us that energy can be clean, affordable, and democratic for all.” - Marcela Olivera, Researcher

This initiative represents an innovative energy practice promoting the local generation of renewable energy, both for municipal facilities and for residents of Barcelona. The programme represents a clear commitment of the Municipality to develop an energy model based on a distributed and clean energy generation. It also sets a path that encourages the process of democratisation of energy and multi-stakeholder participation and active involvement (e.g. local authority, residents and companies). Other cities in Spain have been inspired by the Barcelona’s model and they are adapting it to their contexts. Other local authorities, also outside of Spain, could learn from this initiative and replicate the model in their cities.

Barcelona Energia on Wikipedia (In Spanish)