A Great Debate to Accelerate the Energy Transition - Nantes 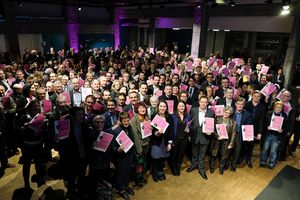 The metropolis of Nantes turned the energy transition into an opportunity to work on the future of its territory by opening the energy debate and enabling the collaboration between citizens, municipalities, companies, NGOs and other stakeholders. In 2014, Mayor Johanna Rolland and 23 fellow mayors in the Metropolitan Council decided to mobilise a broad range of stakeholders to co-create a common vision to accelerate the energy transition. On April 29, 2016, the council unanimously voted to develop “Le Grand Debat” (The Great Debate), taking local stakeholders’ perspectives into account and promoting initiatives related to the energy transition.

“The roadmap "Nantes, metropolis in transition" affirms a collective ambition that builds on the singularities of an energy transition in Nantes, as they clearly emerged in the debate: a 100% citizen transition, a transition for the benefit of all residents, a transition that values local resources.” - Johanna Rolland, Mayor of Nantes

Other cities have been inspired by “Le Grand Debat” process and they have implemented similar processes of multi-stakeholders participation and citizens’ empowerment, such as in Cadiz or Viladecans (both in Spain). “Le Grand Debat” represents an inclusive and democratic effort for producing a shared roadmap. In the time to come it will be interesting to understand how the implementation will benefit (or not) from this broad set-up.

Roadmap report from the Nantes Metropolis (in French)