"Uneven and exclusionary urban intensification and regeneration" as a driver of injustice refers to the ways in which new urban developments might force trade-offs between the social and environmental goals of urban sustainability projects. It involves public efforts to improve a neighbourhood’s physical structure and boost its economy by attracting investment, usually in the sectors of real estate and tourism.

Increased intensification, including through the re-development/re-generation of existing urban spaces, can drive injustice when land, housing, and open or green space compete with one another and get reconfigured in ways that have negative impacts on vulnerable residents (Anguelovski et al., 2018[1]; Checker, 2011[2]; Goodling, 2017[3]; K. A. Gould & Lewis, 2016[4]; Knuth, 2016[5]; Shokry et al., 2020[6]). This has been observed in a variety of urban sustainability interventions, like eco-districts, transit-oriented development, green building, greenways, or other ‘resilient’ infrastructure. These processes do not stand alone as drivers of injustice, but are linked to income inequalities, neoliberal development and growth, and the limitations of existing forms of civil participation. 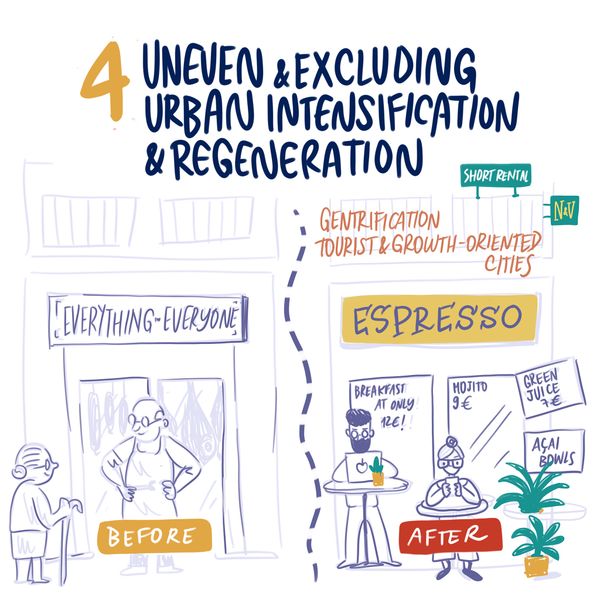 Pressures from urban intensification and expansion are entangled with housing inequality and real estate speculation, as land becomes more valuable and neighbourhoods gentrify. Denser urban centres for business and entertainment can shrink the availability of public space for residents, often in a deeply unequal way (distributional justice) (Anguelovski, 2013[7]; Certomà & Martellozzo, 2019[8]; Säumel et al., 2019[9]). In the US, while urban densification has been associated with reducing sprawl and smart growth approaches, it is also often linked to the gentrification of previously ‘undesirable’ areas, as is the case of East Austin, Texas, where densification is pushing Black and Latino residents out (Garcia-Lamarca et al., 2019)[10].

Concurrently, urban densification limits the options for more sustainable or nature-based infrastructure, and this increases the environmental impact of cities (through the of use of materials, waste production, and overall pollution). Densely populated housing estates, for example, limit the possibility of making major changes to the surrounding physical environment (Ahas et al., 2019)[11]. This “space scarcity” has to be understood through the lens of inequality, as it is often the poorest residents who inhabit those overly dense neighbourhoods with crowded homes in poor physical conditions, and grey-dominated or limited public spaces. Many times, also, bottom-up green initiatives (e.g. community gardens) have to compete with real estate speculation or/and tourist-oriented developments, and thus densification goals and the associated efficiency and sustainability claims can undermine local social benefits and bottom-up sustainability initiatives (imaginary justice) (BCNUEJ Lab, 2019[12]; SHARECITY, 2019[13]).

Neighbourhood revitalisation/regeneration is often exclusionary, especially in historic urban centres, when it takes place without taking into account the vulnerability of long-term residents in a context of free-market rentals and real estate. Although urban revitalisation is often articulated around sustainability and justice objectives, through the creation of denser, more efficient cities and “trickle-down effects” of benefits (Anguelovski, 2013[14]; URBAN GreenUP, 2017b[15]), it can drive inequality when interventions are centrally planned character, ignoring the needs and demands of long-term residents (procedural injustice) (Annunziata & Rivas-Alonso, 2020).

Leipzig, for example used to be a city with shrinking population, due to housing vacancy. This turned around and Leipzig became an investment spot (“hype-zig”), with increased demand and rising prices in the housing market. A previously open vegetated space in Leipzig’s Connewitz neighbourhood, Leopoldpark is now turned into a privatized and manicured green space with more than 100 luxury flats surrounding it, framing the project as an opportunity for high investment. This marks the financialisation of urban nature as an asset in real estate through urban regeneration [UrbanA Arena insights].

Participation in regeneration and sustainability projects can be a challenge, and the effect of regeneration may be that certain neighbourhoods are radically altered toward a new vision and attractiveness defined by and for non-residents (Caiati et al., 2019[16]). While participation processes might be able to prevent or alleviate exclusion and gentrification, through the active consideration of demands for affordable housing and protection of local business, more participatory processes might not be protective against market forces that generate injustices.

Moreover, and as emphasized also under the driver “”Limited citizen participation in urban planning””, participation itself might entail or lead to exclusion. A regeneration project in Strasbourg city center, for example, involved citizens in creating the parks through participatory engagement tools and aimed for inclusion, but resulted in quite the opposite: those who joined were not representative of the population, but more privileged residents that were able to put time and energy into the participation process. The creation of the square apparently led to gentrification trends in the neighborhood [UrbanA Arena insight].

Lisbon, one of the cities under study, is currently facing “a massive set of transformation” in terms of investment, development, tourism and gentrification. It was recently labelled “The new capital of gentrification and evictions” (Ara.cat 2019), as large parts of the city centre have been converted into housing and venues for tourists. The Marvila old docks neighbourhood is one of the areas facing the strongest gentrification impulse, undergoing a ‘boom’ phase of development due to economic, real estate and cultural expansion that are transforming it into a new pole of the creative economy, centred around star architect Renzo Piano’s “Prata Riverside Village” on the old weapons factory site. The territory is geographically divided by two train lines and while the riverside area receives major investments, the upper side, which consists of fragmented social housing blocks amidst vast empty voids, where the city’s biggest slum, “the Chinese Neighbourhood” once stood, seems a world away from the river. The creation of the council’s BIP/ZIP programme (starting in 2010, [1]) and a public library in the upper side of Marvila (2016) have allowed new citizen movements to organise. With the support of ROCK and similar partners, in December 2018 these movements proposed a plan to “Transform Marvila with gardens and bikeways”, that was accepted by the council. [Source: ROCK project ROCK (Regeneration and Optimisation of Cultural heritage in creative and Knowledge cities), (Martins et al., 2018[17]) 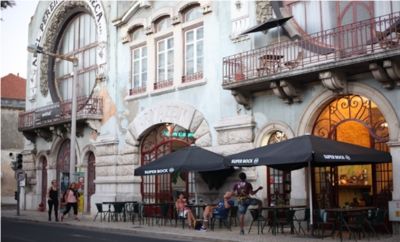 Photo by Ana Naomi de Sousa/The Guardian: Abel Fonseca factory, in Marvila, Lisbon, was transformed into a co-working space and bar. It is across the street from Santos Lima, an apartment block that received media attention after it was sold to developers without informing the residents who had occupied the building for decades.